As a kid, Halloween was one of my favorite holidays. It was an excuse to dress up as whatever I wanted and embark on a spooky, jack-o-lantern-lit adventure while replenishing my Milky Way stash for the year. As it turns out, Halloween is even more fun with a baby!

Meet Dan, Guard of the Citadel.

Making Dan’s costume was so much fun. Ever since our friend Roz gave us a White Tree onesie, we knew we had to use it for Halloween, and the “helmet” and cloak turned out surprisingly well. The hobbit getup is based on this picture of Pippin from The Return of the King:

I left off the nose guard to increase the chances of Dan actually wearing the helmet. He was a pretty good sport.

…and on Wednesday, the day of our ward Halloween party (note: in this context, ward = congregation unit in the Church of Jesus Christ of Latter-day Saints; we do not (currently) live in a mental institution), he decided he needed an orc shirt. I ran down to Michael’s and bought a couple of black T-shirts and some iron-on letters, and we became a couple of orcs. It took people a couple minutes to figure our costumes out, but once they did, they generally thought the whole thing was pretty cool.

“I will vanquish you with my spoon!”

Now I have to tell you guys a somewhat-shameful story. You see, just as we were about to leave the party and put our hobbit to bed, this happened: 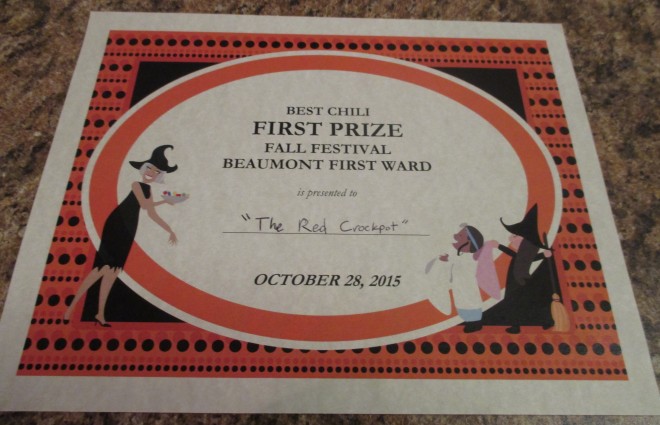 First of all, I had no idea they were even judging chili. When they sent around the sign-up sheet for the party, I just thought, “Hm. They need chili. I can do chili.” I then proceeded to forget about it until the night before. The day of the party, I grabbed an assortment of chili cans from Kroger, dumped them in the crockpot (because I was way too lazy to wash chili out of a crockpot and a regular pot), and threw in a can of jalapenos and a can of green chilies. We got there late, so I dropped the crockpot on one end of the table and proceeded to do normal ward party things. Tom and I didn’t even taste our chili until we got home that night.

I also feel disincentivized to learn how to make real chili. Oh, well.

Anyway, that’s the story of how I accidentally won a chili cook-off using canned chili.

Halloween itself was really rainy—like, flash-flood-warning rainy. It’s a good thing we weren’t planning to take Dan trick-or-treating (two adults showing up with a cute, costumed baby who obviously can’t eat candy is pretty suspect). We did bring Dan to a shindig hosted by Tom’s boss’s boss Nikole, and the hood on his cloak actually kept him dry on the way to and from the car.

It was pretty late on Dan Standard Time and the music was kind of loud, so we didn’t stay long, but I finally got to meet some of the people Tom works with, which was nice. We even got to drop by the NaNoWriMo kick-off at Sertino’s. That was more Dan’s-scene-esque: a quiet room with a handful of people telling Dan how cute he is. He was all smiles. What a punk. 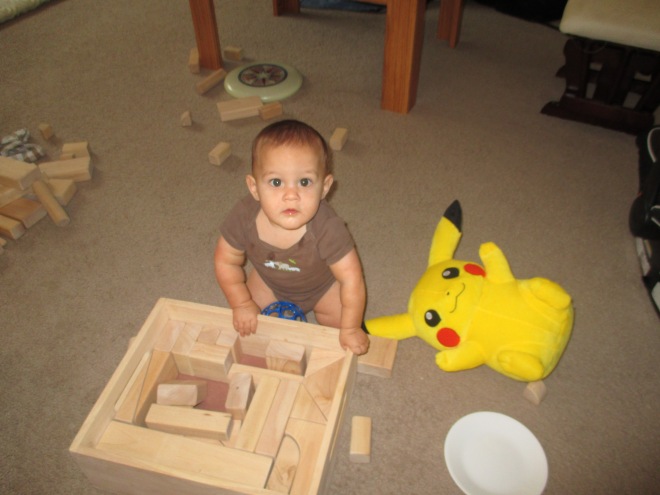 Unrelated picture: “No, Mom, I didn’t make this mess. You did.”

Yep, this was definitely the best Halloween ever, even without any Milky Ways. How was your Halloween, reader friends? Any fun or spooky stories to share?