Tom’s been wanting to do a guest post for awhile, and now he has the perfect opportunity! By the way, my husband is the coolest. Who watches his brothers play a video game, writes an academic paper about it, and wins money? Good times!

Hi, I’m Tom, and this is my long-awaited husband guest post in which I take up weighty matters of scientific research: specifically, I’m going to brag a bit about how I just won money for the infamous Minecraft research paper.

During my time at BYU, I was involved in multi-user 3D computer-aided design (CAD) research—think Google Docs for jet engine design. The lab I worked in used money from the likes of Boeing and Pratt & Whitney to hack multi-user functionality into commercial CAD systems, and then wrote up the best-of-class hacks as patent applications and/or research papers. The theory is that someday Boeing or a company with a similarly long, CAD-heavy product development cycle will pull the trigger on creating a multi-user CAD system, and when that day comes they’ll turn to BYU (a) to spend millions of dollars licensing the lab’s patent portfolio and (b) get the best thinking on the topic. Hopefully it will happen; based on my patent rights I’ll get something like 40% of 1/5 of 7/19 of BYU’s net take.

The possibility of multi-user CAD prompts some golden questions: what would multi-user CAD do for an organization’s design paradigm? Does it let you do more free-flowing collaborative design? How do you effectively manage a multi-user design project? It’s hard to draw conclusions directly about CAD because all the software is still in the prototype phase, CAD expertise is expensive, and there are no real multi-user-CAD-centric organizations to learn from. This is where Minecraft comes in.

For anyone who doesn’t have young male relatives, Minecraft is a phenomenally popular block-based videogame with over 100 million registered users. Players inhabit a world composed of cubical blocks (3d pixels, or voxels) made of different materials; they can choose either a combat and survival-oriented adventure mode or a no-limits creative mode. Thirty or more users can play together in the same world, and people have built amazing things.

A castle built by WesterosCraft

My brothers played the game and I saw a thing or two about it on Facebook. I decided it was really the most similar thing in the world to a multi-user CAD system from the future, and I started pitching a research project where we’d figure out and/or experiment with how Minecraft users work in order to make predictions about multi-user CAD. I’m not entirely sure if it was a joke with a serious idea on the side or the other way around, but the lab’s professors caught a glimpse of the vision, and my co-authors (initially Dave French and Brett Stone, later joined by Ammon Hepworth and Dr. Ed Red) and I started putting some of our research hours into the idea.

We took a survey, did some forum-stalking, and ended up writing a paper about it. WesterosCraft, arguably the most successful Minecraft organization, has built the world of George R. R. Martin’s Game of Thrones series, and we focused in on their practices and users. (They were really helpful, and the paper couldn’t have happened without them.)

Another sweet model by WesterosCraft

In a nutshell, we found that effective use of multi-user software requires at least as much planning and structure as effective use of single-user software. Even when gaming, people need structure and planning to work well concurrently. WesterosCraft will have thirty or more people build a castle all at the same time, but only once a single person has created a formal design document that includes maps, images of scale models, the approved palette of blocks, the relevant information from the books and/or TV show, etc. This document goes through an approval process, everyone reads it, an outline of the castle gets laid out, and only then does the whole organization jump in to build it up and flesh it out. Even then, there is a hierarchical leadership structure managing the work.

So, WesterosCraft is arguably the best multi-user 3D design organization in the world, and its members probably take project management more seriously than some real-world companies. Therein lies our takeaway: multi-user software won’t be a “magic bullet” for shortening design projects, but if already-known good project management practices are followed (good up-front scope definition, effective communication, involved management, etc.) then it can certainly help. We also learned a lot about what Minecraft players like in their teammates, how they like to work together, etc. and compared their preferences against aerospace engineers’.

If all that sounds a little hand-wavy, rest assured that the 14-page paper (which includes 16 figures and 51 citations) provides a little more detail. Titled “Collaborative Design Principles from Minecraft with Applications to Multi-User CAD,” it got presented in August at the American Society of Mechanical Engineers Computers and Information in Engineering 2014 conference and won the Virtual Environment and Systems Best Paper Award. This came with a $500 check (which we’re splitting) and plaques for each of us, which will make interesting conversation pieces in the future. 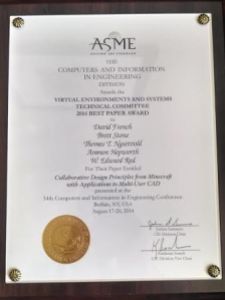 So that’s how I won money for getting paid to research Minecraft.