Inspired by my friend Emily’s awesome Chinese New Year blog post, I’ve decided to introduce a new feature on this blog. In each “Elissa Cooks Stuff” post, I’ll attempt some recipe and review the results. Hopefully there will be some lulz along the way.

When my mom was here after Dan was born, I had a doctor’s appointment in Houston. I couldn’t bring my mom to Houston without going to Chinatown, and we brought home some pre-made chicken for dinner. Guys, that chicken was so good it messed with my mind. Since then, I’ve had all these dreams about going to Chinatown and buying that chicken, and each time I wake up unreasonably depressed because I don’t really have any. This week, after moping yet again about my lack of chicken and wondering if I dared brave a trip to Chinatown alone with Dan, I realized there was an easier option: I could make the chicken myself! To the Google!

I used this recipe, with a couple alterations. For one thing, I couldn’t find smaller organic chickens. I had to go to two stores to find a whole chicken at all—that’s what happens when you shop at 8:30 PM.

Chef Daniel woke up just as I was about to start cleaning the chicken, and promptly took on a supervisory role.

I don’t have any pictures of the cleaning process because I didn’t want to touch my camera with raw chicken all over my hands—we’re all about food safety around here—so you’ll have to just imagine me cluelessly fumbling around with the chicken carcass while my phone is ringing and Dan is mocking me from his bouncer.

I finally managed to get everything into the pot without any major casualties.

However, the chicken fell apart when I took it out.

It was then that I discovered I have no idea how to cut up a chicken.

Now for the reviews:

Taste: Awesome. I’ve found a cure for my chicken-longing. It was obviously overcooked, but that was my fault. Because I had a larger bird than the recipe called for and I had a hard time keeping it underwater, I decided to cook it longer than the recipe suggested, and I overdid it by about 15 minutes.

Ease of preparation: Reasonable. The recipe itself is pretty straightforward, but this was only my second time working with a whole chicken (the first time was heavily supervised, and I still managed to get blood everywhere (so much blood!)), so it’ll be better next time.

Ease of cleanup: Cleanup was a bit of a hassle. There were a lot of dishes, and I had to aggressively 409 everything in the kitchen several times.

Will Tom eat it?: Yes! (Or at least, he hasn’t told me otherwise yet.)

Overall evaluation: I’ll definitely make this again—maybe not every week, because it is a bit time- and labor-intensive, but it’s definitely going into the rotation. Yay chicken!

Sorry, not a lot of baby pictures here. I’ll make it up to you next time, I promise! 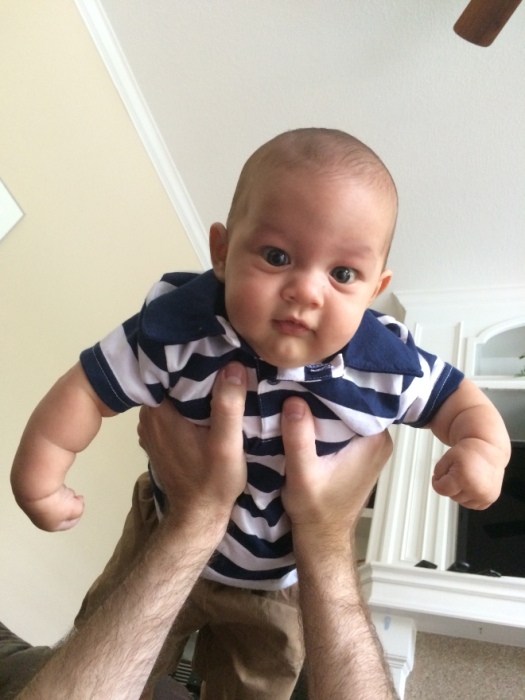